Conservative Australians is committed to policies that alleviate poverty and provide people with opportunities to develop skills that will enable them to provide for themselves on a sustainable basis. Our policies include:

Recognising that access to education is fundamental to breaking the cycle of poverty. We support and promote initiatives that make education available to those who are poor and marginalised, whether they be in Australia or overseas.

Promoting policies and programs that develop the capacity of people to gain employment so that they can provide for themselves and their families. These include vocational training, apprenticeship, employment placement and literacy programs.

Supporting initiatives and programs that provide income security and social supports for those who, due to age, disability or illness, are unable to work.

Recognising that in Australia the biggest determinant of whether or not a person lives in poverty is housing cost.

In many Australian cities and regions those on low incomes and on Centrelink benefits pay up to 60% of their income on housing in the private rental market. Conservative Australians is committed to supporting initiatives that will increase housing supply – both rental and purchase, and to working to eradicate those policies of State governments which drive up housing costs to the detriment of first home buyers and low-income renters alike.

Tens of thousands of people die each day from poverty related illnesses and malnourishment. Conservative Australians is committed to sustainable, targeted and innovative methods to alleviate this suffering, as an obligation to our global neighbours.

It is important to acknowledge and celebrate the achievements of the international community thus far, as decades of myriad efforts have considerably reduced the global percentage of people living in poverty.

These efforts include foreign aid, trade, pro-democracy reforms and increased participation in the global economy and culture.

Australia must continually review its foreign aid budget and delivery to ensure that Australians who are in need are fist supported, then the most needy worldwide that the majority of Australian Funds make it to the frontline needed. 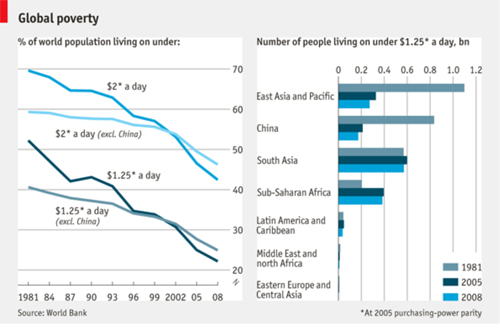 The above graph1 demonstrates the decline in people living on less than both $2 and $1.25 per day; a significant drop of almost 30% since The World Bank estimates that global poverty rates have declined from 2 billion in 1990 to less than 700 million in just fifteen years.

Although this trend is encouraging, suffering remains in our region and around the world due to poverty and limited economic development.

Australian aid will have a life-giving purpose for a very long time.

Australia must set a target of committing 0.7% of its Gross National Income (GNI) to foreign aid. This is more than double the 2015 spending level.

Indonesia and the Solomon Islands.

Economic growth and trade are the most effective means of alleviating poverty in the long-term:

Emerging financial institutions such as the Asian Infrastructure Investment Bank (AIIB) and treaties such as ChAFTA (China-Australia Free Trade agreement) and the TPP (Trans-Pacific Partnership) are central to prosperity in the developing world.

The “Aid-for-Trade” programme allocates 20% of Australia’s aid budget2 to provide finance for infrastructure, empower the private sector, open up trade export markets to developing nations and help them to realise gains from that trade.

Support for NGOs who are signatories to the Australian Council of International Development’s (ACFID) Code of Conduct will ensure greater industry trust, and transparency & accountability of stakeholder funds.

Australian aid will help strengthen relationships with our Indo-Pacific neighbours, fostering safety and stability in the region.